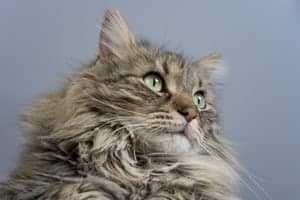 Here is the second part of the largest domestic cat breeds ever. These large cats are often playful and smart. Most of these cats have deep origins in history as their size is closer to the primitive cat’s humanity have known. Smaller cats are results of modern crossbreeding. Here are some great options for you.

This cat has a solid build and despite its thick coat made of long hair, it can actually withstand even the warmest of climates. You can identify this cat through its thick and ragged coat that is made of a multitude of colors. This breed is also a favorite because of its intelligence and pleasing personality. Its coat has a luxurious appeal that makes it comfortable to pet. Another striking feature is how loyal this cat is to its owner. They are not that friendly to newcomers but over time, it is guaranteed that it will develop trust in you. It likes being nearby the company of people but it is not the biggest fan of being placed on someone’s lap. They may even reach the point of actively participating in the activities of your daily routine.

This is a compact and balanced cat. Its muscular build makes it powerful against its prey. As the name implies, this cat has a coat composed of short hair. Their general aura is balanced with some subdued power.

Other people say that this breed is perfect for households because it is low-maintenance but you can trust it to always be there for you. They are balanced in such a way that they do not have extreme characteristics. They are playful but not to the point of being overactive. These are affectionate but not annoyingly so. They also work well as playmates for children.

This is a domestic cat whose physical characteristics mimic those of the cats in the wilderness. They are also known for their loving demeanor and stable emotional stance. Their coat is composed of medium to short strands of fur. You will immediately notice the spotted or marbled patterns that make them stand out. Do not let its wild appearance deceive you because these are very loving and fairly domesticated cats. They are energetic and they love interacting with human beings. If you do get one, you will notice that it is always striving for the highest point in your room or in your house. These cats are also very intelligent and they will easily catch up with your human ways and even get to the point of anticipating your routines.

This type of cat is still quite large but it is not the largest in this list. It is also undeniably adorable. The wild look of this cat does not exactly match its soft personality. Its striking feature is its ability to form very close bonds with its family. These cats are also reasonably active and playful.