Cat Body Language Signs To Watch Out For (Part II) 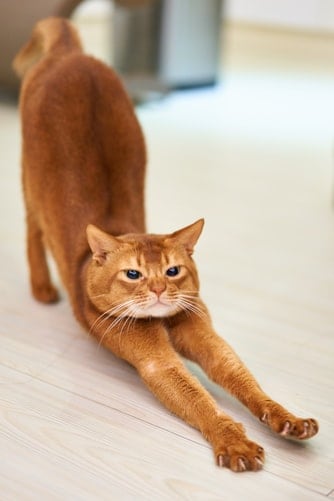 Here is the second part of the cat body language signs that every pet owner should know about. Your familiarity with these will make you understand your cat even better and it will allow you to respond to anything they need at that moment.

Cats do not like making prolonged eye contact because they feel threatened. Contrary to dogs or humans, cats do not use eye contact as a sign of affection or trust. They use it as a sign of aggression. You might notice that cats prefer the human being in the room that does not make eye contact with them. they are also very sensitive when being watched. Once they realized that they have a pair of eyes on them, they usually stop what they are doing and assess the situation.

A fearful cat’s pupils grow bigger whenever it feels scared. An aggressive cat’s pupils will dilate to focus on specific things. These expansion and dilation are affected by the amount of light present so do not forget to consider those as well.

Cats grew up to always be on the lookout for themselves. You can expect their predatory side to jump out every now and then. This can be triggered by aggressive playing or too many distracting elements in their surroundings. They may also feel this way if they are being too aggressively petted or stimulated

Their predatory nature makes them want to chase after anything that moves or dangles. They usually focus on the moving object and then pounce at the last minute to make their “kill.” There might even be times that they will treat you as their prey. Your cat might jump out of nowhere and then pounce on your leg to “catch” you. The danger is when you suddenly move which triggers them to dig their claws and teeth deeper into your skin the best thing to do is to freeze until he lets go. You also shouldn’t enable this behavior. Other signs include dilated pupils and flattened ears. You should back off when you see these.

Did you know that meowing is a language that cats use to communicate with human beings? It is initially used to communicate with kittens but it is now a mode for them to talk to humans. They can use their meows to catch your attention ad ask for something. There are different kinds of sounds that cats perform. Purring is a sign of contentment or they are seeking comfort. High-pitched sounds in the form of chatting or gurgling are just friendly chat. Growling, spitting, hissing, and other forms of aggressive behavior is a sign for you to back off until your cat calms down.

These sounds aren’t exactly universal. Your cat may develop a special sound to catch your attention. The best you can do is to spend more time with our cat and understand his every behavior. No one knows a cat better than his owner.